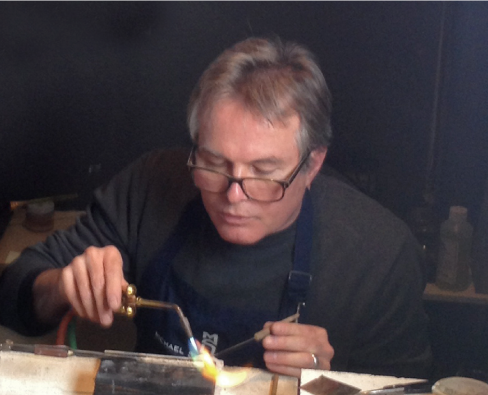 Michael is a studio jewelry artist, goldsmith, writer, educator, and industry consultant. He took his first class at the Revere Academy in San Francisco in 1986, where he says “I learned more in 5 days of a professional workshop than I had in the previous five years unguided.” This led to the career altering realization that instruction and formal guidance are an essential part of mastering skills. He is now widely known for teaching the Marketing Designer Jewelry class from 2005 – 2015 and developing the curriculum for the Jewelry Biz Essentials program that was a popular capstone at the Revere Academy starting in 2015.

In addition to creating his own work in his studio, Michael now devotes much of his time each year to passing on the knowledge and skills he has gained to students of all levels – from beginning fundamentals to professional advancement. Michael is a respected mentor and business coach. He frequently holds classes at the Bead & Button Show in Wisconsin and teaches workshops at studios and other shows around the country and internationally. Each January-April, Michael offers his In-Depth Retreats.